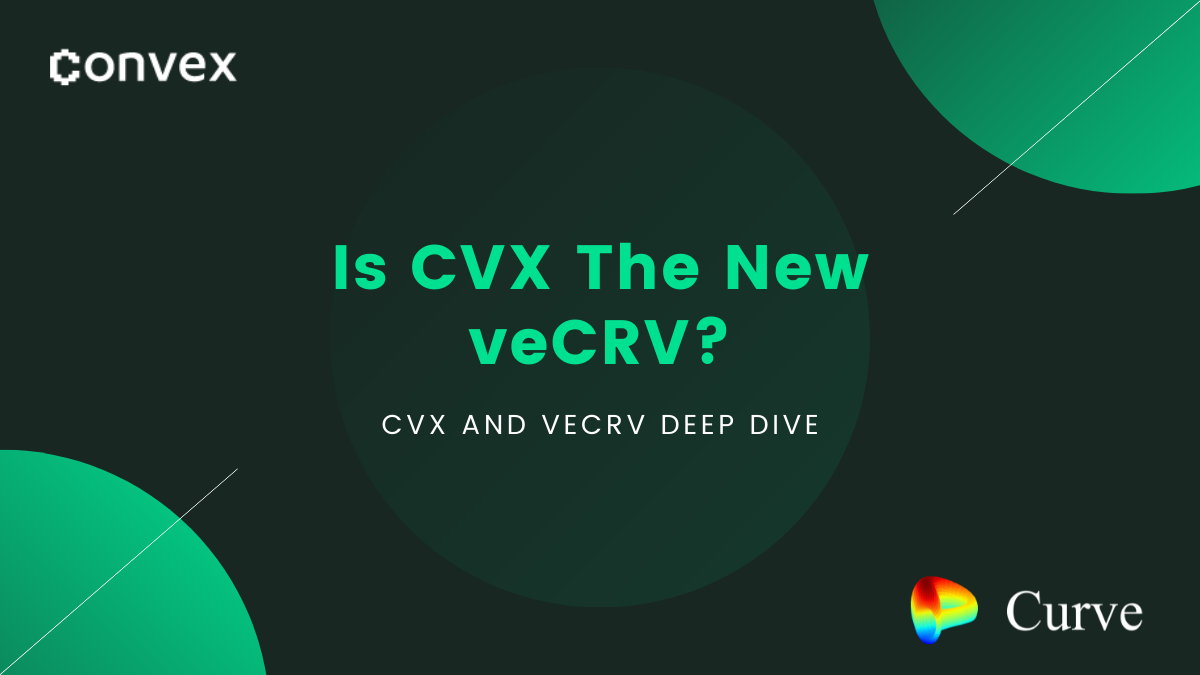 Please take everything in this article as my own opinion and to me this was an interesting thought experiment that I wanted to publicly share. Im sure I am missing details around certain things but regardless this is still a very interesting topic that has yet to be explored. Any feedback is greatly appreciated!

None of this is financial advice. I may hold any or all assets discussed in this article.

Convex Finance has been able to lock up close to 24% of all veCRV (57.4m) all in a very short period of time. This has led to some interesting developments such as #TheLockening (s/o Defi Moon on Twitter), which is where protocols such as Yearn and Convex fight for veCRV.

Another interesting development is that in the near future holding CVX will allow you the right to vote on how Convex uses their massive warchest of veCRV. This development is what spawned this article and the comparison of the CVX token and veCRV.

This article is going to take a deep dive into comparing how the CVX token is potentially turning into the new veCRV.

First let’s start with some basics:

What is veCRV and What Does it Do?

veCRV (voting escrow CRV) is what you receive for locking your CRV tokens for a period of time. The longer you lock the more voting power you get and the more boosts you can get.

Why would someone want to lock their CRV?

There are 3 main benefits that come from veCRV:

Let’s now take a look at how the CVX token stacks up against each one of these veCRV benefits.

Having the power to control where the CRV emissions are dispersed each week is extremely powerful. For individuals, this could mean increasing the emissions for the pools where you have the most capital deployed. For protocols such as Badger, increasing emissions to the BTC pools benefits you because your main business revolves around generating yield on BTC.

As of right now CVX does not have this ability. HOWEVER, in their docs they clearly state they will have a system in place that will allow CVX holders vote on how Convex votes with their 57m+ veCRV each week.

In the near future holding CVX tokens will allow you vote for how the CRV emissions are dispersed exactly as you would with veCRV. This means that by owning the CVX token you will have a say on how the 57m+ veCRV is used each week.

Since CVX does not currently have this feature veCRV wins by default. However, I think it is safe to assume Convex will implement this system at some point making veCRV = CVX in this regard.

veCRV holders receive a share of Curve’s trading fees which are dispersed each week to veCRV holders. This is an extremely valuable revenue source that is fairly sustainable due to the fees being generated mostly via stablecoin swaps, which happen a lot in both bear and bull markets.

The average APY from these fees hovers in the 10-15% range. You are paid out in 3crv tokens.

CVX also gives you rights to the platform fees of Convex.

5% of all fees generated by Convex are sent to CVX stakers. This revenue is generated from Curve LP’s CRV earnings who are staked on the Convex platform. The sustainability of this revenue is yet to be seen, but as long as Convex can provide the highest ROI for Curve LPs then their TVL should continue to rise.

The average APR for CVX stakers has historically been in the 50-60% range. CVX stakers are paid out in cvxCRV (tokenized veCRV).

CVX is the winner in this category due to the much higher yields. Not to mention you do not have to lock your CVX in order to receive this fee share as you would for veCRV. That alone is a huge advantage for CVX.

However, I would argue that the revenue share from Curve trading fees are a more sustainable source compared to Convex’s revenue from Curve LPs.

Locking CRV in order to get max boosts on your Curve pools is a major use of veCRV.

The issue at this point is this it’s a whales game. Smaller players need so much veCRV to reach max boost that it doesn’t make sense to even try at this point. They are much better off using platforms such as Yearn or Convex which handle the boosts for them.

The fight for veCRV in order to maximize boost is now a game played by massive whales and protocols such as Convex and Yearn. I would argue that for individuals, the value they get from boosting their own pools is very small at this point and shrinking by the day.

CVX holders do not directly benefit from increased boosts in any way. However, thanks to the Convex platform users can access these boosted pool without needing veCRV at all.

veCRV wins again by default. However, I would argue that the Convex platform itself has reduced the need dramatically for individuals to worry about their own boosts. From a utility standpoint, veCRV has this ability and CVX doesn’t. Winner veCRV.

From a whale/protocol perspective, this is still a massive benefit to owning veCRV directly. Being able to max boost your pools is in most cases the primary use of veCRV. But as we have seen, even protocols such as Yearn have started to move some of their funds to Convex due to it having higher boost.

So a quick recap:

The biggest difference between CVX and veCRV is the ability to boost your own pools. For small players, this matters almost none. For large players this does matter.

Buying Voting Power at a Discount via CVX

One area I want to dive deeper into is how buying CVX gives you access to veCRV owned by Convex Finance and how you could potentially buy veCRV power for a fraction of the actual price.

As I mentioned earlier, Convex is going to implement their own gauge weight voting system that will allow CVX holders to have a say on how their veCRV is used each week. This could benefit many entities such as large whales or even protocols such as Yearn so they can determine which pools get the bulk of the CRV rewards.

In this section I will run the numbers to see how much it costs to own veCRV via CVX vs. owning veCRV directly.

Let’s take a closer look at how much it would cost to acquire veCRV via owning CVX.

Assuming that owning 1% of the CVX supply would grant you access to 1% of Convex’s veCRV, we can do the following calculation.

For $322k you can own 1% of the entire circulating supply of CVX.

That means you can buy the voting power of 574k veCRV for $322k via buying CVX.

What Does this Mean?

This means if you are a whale or a protocol that is looking to align the CRV emissions with your own interests you are potentially better off buying CVX vs. veCRV. You will get the equivalent voting power for 70+% cheaper.

As we discussed earlier though, CVX does not come with the ability to boost your own pools. So the discount between CVX and veCRV could be warranted.

There are 2 major assumptions that would need to be true though:

If these two assumptions are true, buying CVX as a backdoor way to get veCRV at a discount could make a lot of sense.

One interesting thought experiment to run through is if Convex is able to lock up a majority of the veCRV, say 75% of the total veCRV.

What impact would this have?

An obvious conclusion from this example scenario would be that Convex finance would almost fully control how the CRV emissions are divvyed up each week. That means that anyone that wants to have a say in this regard would now need to buy CVX instead of veCRV. This could add a lot of buying pressure to the CVX token in this example.

Another interesting second order effect of this example would be that the fight for veCRV is pretty much over and won by Convex Finance. Now would the fight move to owning as much as CVX as possible instead? Or would protocols/whales still fight over control of the remaining 25% of veCRV?

So if CVX the new veCRV?

CVX does not have the ability to boost Curve pools. This is a clear difference between the two.

So CVX may not be the new veCRV, but it is the closest thing to it!

I also think the answer depends on whos buying.

For smaller players that don’t care about boosting their own pools (thanks to Convex doing it for them), then CVX is as good as veCRV in its utility. CVX gives them access to gauge weight votes + platform fees (Convex platform vs. Curve).

For larger players, they will find more value in holding veCRV directly in order boost their own pools. In this regard CVX is not as valuable as veCRV. However, for protocols that want a cheap way to boost the CRV rewards for pools that align with their own interests CVX is a cheap proxy for veCRV.

An example could be any protocol that has a Curve pool such as Ren, Frax, USDN, USDP, etc they might be interested in potentially acquiring CVX as a cheaper way to boost their own pools. In this regard, CVX is playing a very similar role to veCRV.

My final conclusion is that CVX and veCRV have many of the same characteristics and utility and depending on who’s buying, could potentially be a cheaper way to get their hands on veCRV by way of CVX.

It will be interesting to see how the CVX saga unfolds and what interesting dynamics play out.

What do you think?